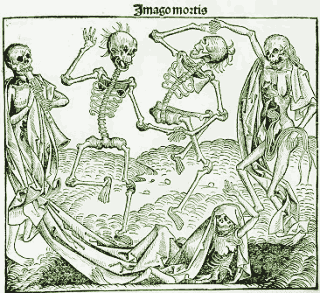 Spucky and Agartha follow the maps to the east, looking for the way out marked on the map. Suddenly, the distant thud of hooves is heard. Two skeletons on skeletal steeds thunder into view. One of the horses breaths a noxious gas at Agartha, causing her to be sick for a long time (the maximum possible rounds, in fact)... which is really bad, because Spucky's not much of a melee fighter, and while the skeletons aren't that accurate with their attacks, the horses are, and they're tough! Spucky gets kicked by a horse, and Agartha runs to give her a potion (splashing her with a little puke in the process). But the gnome is still being attacked. I decided to risk casting a healing spell, but got attack-of-opportunitied and Spucky wasn't any better off -- she did get the spell off, but after being attacked her HP wasn't any better. And Agartha was still going to be sick for a while. It was looking dire! I really thought we were going to die!

I decided the best chance was to try and fight defensively until Agartha got better, so Spucky took a few swings at the skeletons while attempting to dodge their attacks. Nobody hits anybody, but the rounds pass, until one of the horse belches out another poison cloud. Spucky has to move, and manages to get a short distance away from the horses, where she's able to cast Magic Stone while the skeletons focus on the poor heaving barbarian for a moment. Then -- amazingly enough, on the last couple of rounds before Agartha would have recovered and demolished them anyway -- Spucky gets off two Magic Stone hits in a row, killing both undead with a single bullet each. It was an amazing turnaround!

Without their riders, the horses become docile. Docile enough for us to get on their backs and ride! The tunnels fly by in a blur as the adventurers transport their still-unconscious captive. We round a curve and head north, hoping to reach the spot the map indicates is home to another Grim.. but before we get their, we run smack into Drusiphia, fleeing the other direction. She's being followed by Junior, and apparently hasn't copped to the fact that she controls him yet, because she's firing arrows at him. Before she can figure it out, Agartha grabs her, and Spucky grabs for her pouch, managing to recover the amulet and regain control of Junior. WHEW. Drusiphia is just about dead from exhaustion, and we tie her up with the whips and put her on a horse... good thing we've got the horses. And good thing the Grim is just ahead - although we don't know how the magic evil-destroying owl will react to our captives, we really need to rest and recover...

... Except the Grim, and the entire cavern its in, have been roasted to a crisp by something. The Grim's spirit arises and explains about a something called the Flame-Walker that's roaming around. Something we definitely don't want to run into! The party keeps heading north as fast as possible, hoping to make it to the exit, and we do. The door stands in front of us... sealed shut.

DM's Very Important Note: I didn't decide the door was sealed this way until they got to it. I was, in fact, stalling, because I had nothing particularly special planned for the end of this dungeon crawl, and no clue what was on the other side. I thought a stock moral dilemma would  buy me time... and it did. But it also causes an unintended and amazingly dramatic sequence to occur. When I confessed to Kitty that I made the door up last minute, she wanted to hit me.

Drusiphia helpfully explains that you have to sacrifice someone to make it open, and suggests the other captive,who she recognizes as someone called Trevor, and who she claims killed someone to gain entry in the first place. It may or may not be true, but should she really suggest killing someone at this point, after she tried to rob us? It sure wouldn't be Trevor who got stabbed! Of course, we wouldn't kill helpless prisoners anyway, and Spucky is just considering whether one of the skeleton horses would count when the tunnel to the west lights up. Junior moves into action, shielding the party - just as an enormous fireball crashes into him. A fireball big enough that the rest of us would have been vaporized on the spot if he hadn't been there. Then... the flame walker appears, a scythe-wielding skeleton with a core of fire. Spucky decides to stay back with the horses and let Junior handle it, but Agartha bravely steps forward to confront the creature.

Junior gives the flame walker a light pummeling, but the skeleton responds with a single deadly swing of its scythe -- a quadruple-damage critical hit which is enough to destroy even him. His noble sacrifice (okay, he's just a construct, but I'm anthropomorphizing, dammit) causes the door to swing open at the moment of his death, and the party escapes out the door, the horses crumbling into dust as it closes, trapping the flame walker in the caverns. We're out of the caves at last -- but where are we now?

DM: I'm endlessly in love with the effect of dice on a game. Seriously, almost nothing but a critical hit with a magic scythe COULD have killed Junior. And if that hadn't happened, the door would never have opened until one of the PCs died or killed someone.


Sure, Junior was a construct, so you might think he shouldn't count towards the door. My logic was that the door actually responds to the emotional connection to the sacrifice - the PCs certainly thought of Junior as part of the party at this point.