And suddenly, there were players. No Yellow Sign required.

Posted by Chris Lowrance at 9:20 PM in: Adventure Ideas, Call of Cthulhu, DnD 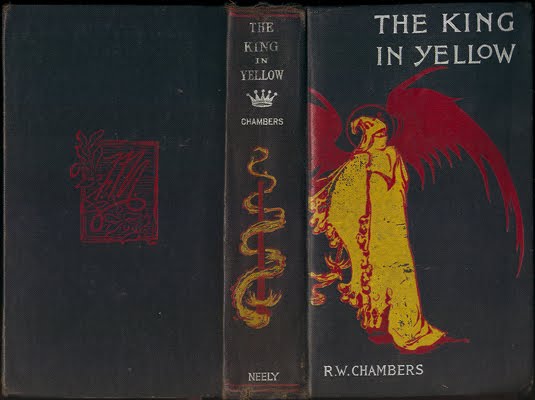 So. Last week I picked up used copies of the Player's and Dungeon Master's guides (3.0, because flipping through 4 just confused me and they didn't have the player's in 3.5). Then we headed over to some friends' house, and I carried the books in with me because I knew they'd get a kick out of them.

Turns out they'd be willing to play.
Read more »
2 comments 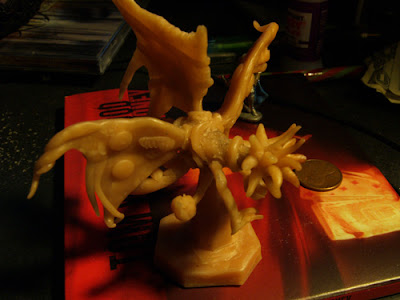 The Fungi from Yuggoth, also known as Mi-go but I can't call them that because "a Mi-go" somehow fails to instill terror in my heart, happens to be my favorite Lovecraftian race. Don't talk to me 'bout no Deep Ones. We've got an island full of them here in North Carolina. And the Elder Things look like an angry wine barrel with a starfish on top.
Read more »
5 comments

Posted by Chris Lowrance at 9:14 PM in: DnD, Other People, Sex is Good
The other night, my wife and I sat down and watched every episode of I Hit It With My Axe.

Which is also the name of Zak's blog, let's be fair. But here's the thing - I'd watch this group of people play regardless of profession and am almost annoyed by the Escapist's "HEY GUYZ BOOBZ" promotion.
Read more »
3 comments 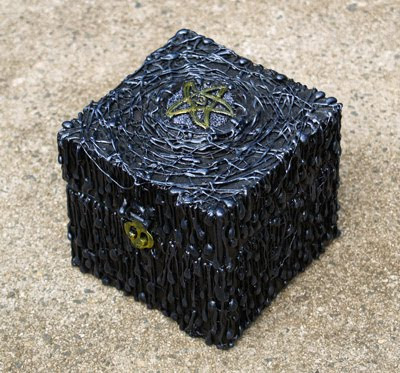 Alchemy is real. All you have to do is take a cheap wooden box from a craft store, a hot glue gun, some Sculpey and a can of black spraypaint. Mix them together and you get pure Metal.*

It's a common conceit that all DMs have a prop. Tycho has his cape. This... thing had his little hat, there.

I, personally, have never witnessed such a thing. If you're a gamemaster and you do adorn yourself in something to signify said title, perhaps something definable as garb, I'd love to hear about it.

But I do like atmospheric doo-dads, doubly-so when they are functional and double-dog-daredly so when I can make it myself. Enter... The Cube Box!
Read more »
2 comments

The Epipletic Cart bears no physical characteristics to differentiate it from an ordinary two-wheeled dung cart, and a particularly worn and rickety one at that. It's the kind of dung cart the stingiest of land barons would be embarrassed to see his serfs haul dung in. Better to make them carry it in their arms than to have such an eyesore mucking about the place.
Thankfully, the cart never stays around long, instead choosing to dart across the countryside both driver- and horse-less, tottering on it's two wobbly wheels. It is also an infrequent visitor, only showing up on those rare hours before Wednesday and after Tuesday and then leaving again, its tracks fading away just a few yards from where it was last seen.

All in all the Cart would be a pretty boring occurrence, if it didn't always take a few children with it, never to be seen again.
Read more »
0 comments

Hello. How's it going? What the hell am I doing?

Right. I am a gamer. A role-player.

I was clean for a long time. For years, even. I didn't touch a die once in college. But last year, I fell off the wagon. It didn't go well. I got clean again, but the itch was back... stronger than ever. Maybe I should start from the beginning.
Read more »
0 comments