Ten Things that Might Be in a Goblin's, Gnoll's, Orc's or Troll's Pocket

Posted by Chris Lowrance at 3:55 PM in: 10 Things, Design, DnD, Items, Joesky's Rule
1: bag containing 16 meaty sticks fried in tallow. Each contains three small bones and a hard bit at the end. Can be eaten in place of a day's rations.

2: Phosphorescent, foul-smelling green sludge packed into a small tin. The being carrying it has some smeared over a partially-healed wound. Will clog bleeding wounds immediately, and speed natural healing 50%. However, the wound will scar terrifically and a Fortitude check must be made for every point healed. If a check fails, the scar tissue grows deep enough to be a source of constant distracting pain (1 point permanent Charisma loss). After a save is failed, no more checks are required and there is no further Charisma loss for the duration of that application. There's only enough salve left for three applications.

3: A red, a blue and a purple mushroom. The red mushroom is the only antitoxin the the poisonous blue mushroom (no save, immediately begin "drowning" as throat constricts). Eating the purple mushroom grants the ability to tell the effects of all fungi at a glance for 1d4 rounds, but renders you colorblind for the same amount of time so that the mushrooms are the exact same shade of grey - the player can specify "the poison mushroom" or "the antitoxin mushroom" but isn't told which is blue or red. The blue and red mushrooms are exactly the same in all ways except color, and each are big enough for four doses, but the purple mushroom is very small and it only works once.

4: A torch that has been soaked in something improper. A spot check DC 20 will show a funny tinge to the tar. A wisdom check DC 17 means the PC notices a strong chemical smell. An attempted alchemy check DC 15 will reveal the substance contains several dangerously explosive ingredients. If a small bit of the tar is "tested," see below.

Whoever tries to light it must make a Reflex save or take 1d6 damage, with a 25% of catching fire (hair, a shirt, something). Regardless, anything that can ignite will if the torch lands on it. The torch burns hot enough to melt iron, but will exhaust itself in 10 seconds leaving nothing behind (besides any fires it inevitably started).

5: An ugly black stone with a frowning face carved into it. Every 12 hours there's a 35% chance anything flammable and in contact with it will catch fire. If held or worn when the roll is made, it will do 1d6 points of fire damage.

6: A thick white liquid in a vial. It's a healing potion, restoring 6 HP but also dropping your WIS, INT and DEX scores to 3 each, or 6 on a Fortitude save, as you collapse into a heroine-like high.

7: A screw-top jar with a spider in it. Every so often the spider simply vanishes, then reappears in the jar. It's actually a baby phase spider - the jar has an equal presence on the ethereal plane because a suicide once drank poison from it.

8: A fine blond wig, some lipstick, various colors of eye shadow and a charcoal pencil like the kind fashionable ladies and fops use to line their eyes. The wig is remarkably well-kept. All together the set is worth about 50gp. Also, a comb carved from a humanoid pelvic bone and a highly-polished silver plate. The plate's worth 25sp.

9: A rabbit pelt sewn back together to make a crud hand puppet, with a little wooden dagger tied to its paws and thick leather stitching for eyes.

10: A living, Tiny chunk of ocher jelly in a bottle. Can be thrown as a grenade-like - will break on contact and do an ocher jelly's acid damage in a splash-pattern. That will dissipate the jelly enough to kill it, though.
2 comments

Of course the imaginary dragon in our fantasy game shouldn't talk. I knew we were doing something wrong.

Posted by Chris Lowrance at 5:12 PM in: DnD, feminism, Other People, sexism
After being unable to sleep, I got up the other night and saw Zak Smith had just posted this. A quick exerpt for the lazy:

Even though it has little to do with the bottom line, once in awhile the pyrotechnic display of bigotry, sexism, self-righteousness and can't-be-bothered-to-google-ignorance that I periodically get in my inbox in response to this TV show that the Escapist pays us to make about our game kind of makes me despair for humankind.

The post is mostly to thank his readers for being intelligent and bolstering his mood against the ionic-fuckwit-pulse emanating from his inbox each time a new episode of I Hit It With My Axe goes up. What followed was an outpouring of support from his readers and the old-school-gaming community. Later on, Mandy Morbid, one of the stars of the show and Smith's girlfriend, posted:

I honestly can't say my experience doing the show has been altogether-especially-positive (due to the massive sexism issue and the amount of exposure I opened myself up to--knowingly) but everything you all are saying helps heal whatever regret I have and makes me feel like I'd like to continue with it given the opportunity.

It was at this point I went from feeling merely sympathetic (having dealt with massive waves of hatemail all the time in previous jobs) to just goddamn angry that a group of people should get so much flak for such blindingly stupid reasons it makes them seriously consider not continuing to get paid for playing a game.

Then you have to consider the actual positive impact the show has had - either via first or second-hand accounts, there are women gaming now specifically thanks to watching the women on the show have fun doing so. One commenter mentioned how the blog and show helped them with their own marginalized status as a queer gamer.

Furthermore, should they not accept the opportunity to keep doing the show (if offered), it will deprive me of something I enjoy. I do not appreciate being deprived of things.

More importantly, I don't appreciate the world being deprived of things that are good for it because the tumors of humankind managed to extend their pustules within range of a keyboard.

Unfortunately, it's one of those situations where there's little to be done besides not being the thing you hate. The very fact Smith's original post has over 60 comments, all of them positive, shows that at least this corner of the old-school-gaming community has the right idea. That's really, really good to know.
0 comments

Posted by Chris Lowrance at 12:46 AM in: character generation, Design, DnD, Other People
Responding to the idea of "NPCs as Artifacts" on Telecanter's Receding Rules:

I like the idea of having some scalable NPCs handy. These are villains you can pull out that are more interesting than "Bandit Leader" but with plug-and-play features so the are just as fair a threat to level 1 PCs as level 20.

I specifically want to avoid just adding more underlings. I am cool with upgrading equipment or spells, but it should be iconic stuff - the evil sorcerer with a fetish for electricity would have some better, stronger electricity-based spells. I specifically do not mean that, if the NPC is reoccurring, they should scale - there are reasons when you might want to do that, but usually it cheats PCs out of the pleasure of going back and kicking the ass of the putz that sent them packing last time.

Not sure if this concept fits with Telecanter's original idea, but it's something I've been chewing on and the Artifacts thing made me thing of it.

Phillip's body is as tense and knotted as corded rope, and he has the charisma of a coiled viper. Few who knew him as a boy would be surprised to learn he became a highwayman, and a good one. When Phillip's crew are working a stretch, it's with a methodical grace that's yet to fail him. Phillip has established a near-mythological reputation for himself as "Phillip the Culler," through the clever combination of a fear-inducing poison, his talent at sneaking and hiding, and his expertise at fighting with the twin sickles handing from his best. His overriding preference for his iconic weapons may be his most exploitable weakness in combat.

Scaling: Phillip should always fight with his twin sickles, but how good he is at it is up to the DM. Without any help, a character is severely handicapped in most rulesets when they fight with two weapons. Increasing his skill with the weapons, with dual-weapon fighting, and the quality of the sickles themselves all incrementally strengthen Phillip's threat. The actual effect of his poison is also worth tinkering with - simple morale penalties, up to forcing characters to drop weapons and flee, or cower, on a failed save are all possible.
1 comments

Like Nancy Drew, if Nancy Drew had a sex life and impaled people.

Posted by Chris Lowrance at 1:21 PM in: Alanna, Art, feminism, Recommended Reading, Sex is Good, sexism, Tamora Pierce, Torall
My wife, who eats novels like Sweet-Tarts, has recently bored through several series of fantasy novels with female protagonists. The other day, while finishing rereading The Atrocity Archives, I realized I couldn't say the same - in fact, I couldn't think of any books I read recently with women as the main characters. I've read several written by women, but even those primarily starred men.

That really bothered me. For one thing, I realized it was kind of boring. So I asked Kitty to suggest something to me from her collection.

"I think you'd like this series," she said, handing me Alanna: The First Adventure, the first part of the Song of the Lioness quartet. It was the edition I show here.
Read more »
5 comments

Posted by Chris Lowrance at 9:07 AM in: Call of Cthulhu, Cubicle 7, Delta Green, Doctor Who, Laundry
The people who did the Doctor Who RPG (which, from looking at the rules a bit, holds no interest for me) are releasing something I'm very, very intrigued by: 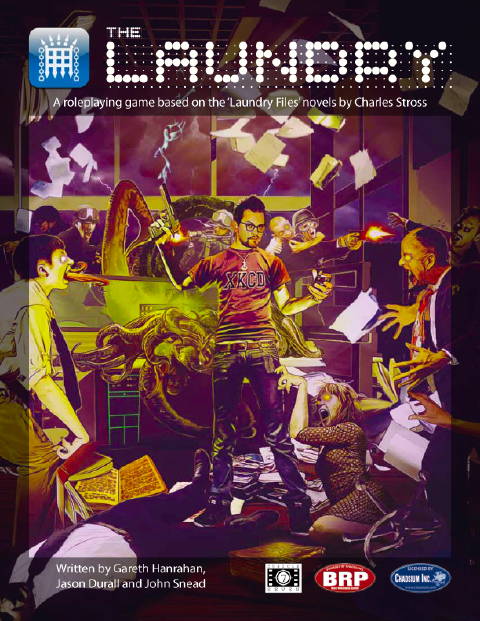 A RPG based on Charles Stross' excellent "Bob Howard" novels. If you haven't read them, you should if you like H.P. Lovecraft, the idea magic is a branch of pure mathematics, espionage thrillers or parodies thereof, nerd in-jokes and sardonic British wit about bureaucracy and certain doom.

If you've ever played Delta Green, it's that but British and with a sense of humor.

Ever since reading The Atrocity Archives I've thought an RPG would be great: Blowing holes through undead Nazis with a Hand of Glory, holding back uncouth horrors with a containment pentagram drawn with conductive Sharpie and powered by your custom smart phone, and if shit really hits the fan crossing into a level 3 space-time rift, basilisk gun at the ready, to shut the damn thing down.

The fact this uses the Basic Roleplaying System, which I consider the most straight-forward out there, only adds icing to the cake. Now... if only I could find someone willing and able to run a game, because this is something I'd much rather play than GM.

Posted by Chris Lowrance at 4:10 PM in: Adventure Ideas, Design, DnD, Other People
The following was generated using Zak Smith's Mad Libs Dungeon Generator. I take no responsibility for the stupidity of any of my answers.
Read more »
0 comments