Posted by Chris Lowrance at 11:05 AM in: 31 Creature Features, Design, Halloween, Monster, October 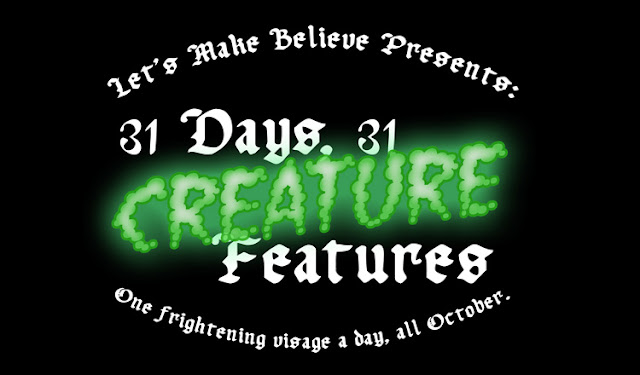 October is my month, and Halloween my day. I've loved it all my life, for as long as I can remember. As a teen I could never shake the feeling Halloween would one day change my life for the better. As it happens, I married a woman born on Halloween. I proposed in a graveyard in Salem, MA on (the weekend before, close enough!) Halloween, and we married a year later on... you guessed it... Halloween.

I am hardcore about Halloween.

Thus it felt fitting to celebrate the month that justifies the existence of every other month with all of you. The best way I can think to do that is gifts, 31 of them, handed out one at a time.

Each day from 10/1 to 10/31 I will post a completely original beast, monster, undead horror, uncouth abomination or particularly unpleasant person. I will try and post some kind of original art with them, but no promises. I also can't promise stats - I'll try to give D&D 3e stats, at least, but as that's the most time consuming part I may skip it. Hey, I'm giving you 31 ideas for monsters here! It's kind of a big commitment! Besides, make up your own stats and you can use them in Call of Cthulhu, GURPS or whatever you wish.

I hope you find Make Believe's menagerie tricky for your players and a treat for all involved. We'll see you tomorrow... meh heh heh...
0 comments

Posted by Chris Lowrance at 9:06 AM in: Art, Carrow, character generation, DnD, my players, Other People, play report
My online campaign has now progressed across four sessions, two of them one-on-ones with the individual players. So who are these illustrious players that have felled giant trapdoor spiders, hit little girls with rocks, and dodged mad cows?
On her laptop a few feet away, trying not to peek at my giant monitor(s), there's Kitty Lowrance. One trick to playing online, when two of you are actually in the same room, is being careful to type anything game-related in chat so as not to exclude the other player. Thus we have two conversations going at once - Kitty, your turn. "You hungry?" I'm go to swing my greataxe at the dark-haired guy. Um, what do I add to that roll? "Yeah... let's make popcorn!" Since you're raging? I think it's + 6. "Okay. After my turn I'll go start it."

Kitty plays Agartha Daggath the "barbarian." Her background and motivation remains a cipher, but her personality had quickly developed - hot-tempered but nobody's fool, mildly self-interested, argumentative. Without realizing it my wife is role-playing the same archetype as Han Solo.

At 5' 10" and 270lb, Agartha swings a greataxe the size of a halfling with murderous strength, and when she goes into a rage, she's already shown the ability to drop typical level 1 opponents from full life to -10 HP in a single blow. The Barbarian is not just a weaker version of the Fighter.

When I first heard a description of the new D&D Essentials character generation rules, I was... taken aback. Essentially, you go through a choose-your-own-adventure type scenario, and  each choice you make impacts your character.

"So they turned it into a quiz from a teen girls' magazine," Kitty says.

"Yeah. Or a Livejournal 'What Hogwarts House would you be in?' type of thing. 'What is your favorite animal? A: Snakes, B: Ravens...'"

But then, last weekend, I walked a couple friends through creating their first characters. In any role-playing game ever. It took the entire evening, even using 3e's "quick start" packages, after which everyone was too tired to actually play a game.